Ride of the Kings

The Ride of the Kings

History:
The Ride of the Kings, a folklore festival, is Vlčnov’s greatest cultural event, and its significance reaches beyond the borders of the Czech Republic. Vlčnov’s festivities, featuring the Ride of the Kings, are held every year on the last Sunday of May. The original Ride of the Kings ranks among the oldest European folk customs and its uninterrupted tradition dates back to the year 1808; Napoleon Bonaparte had won the Battle of Austerlitz three years before and was in the process of preparing his campaign against Russia. However, the roots of this custom reach even deeper, as some of the pagan myths indicate. Several theories attempt to shed light upon the origin of the Ride of the Kings. 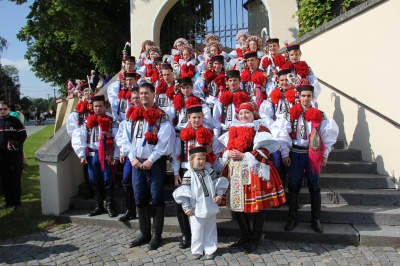 The best known and most recent theory is associated with the Bohemian-Hungarian War. In 1469, The King of Bohemia, Jiří of Poděbrady, defeated his son-in-law, Hungarian King Matthias Corvinus, who, in order not to be recognized and captured, dressed up in a female folk costume, covered his face with ribbons and headed for his residence in Trenčín guarded by his company, who had to collect money from serfs to feed him. This version of the Ride of the Kings has been handed down for generations.

We bid you a hearty welcome to Vlčnov with the cry of the King’s riders:
“Harken, ye highlanders, lowlanders, home lads and strangers, to what I shall tell you on the Pentecost. Our king is honourable, yet very poor.”

Or you may like this prankish one:
“Do not fret when your mother-in-law joins you for the Ride, vintage Starohorské wine will surely cheer you up.” 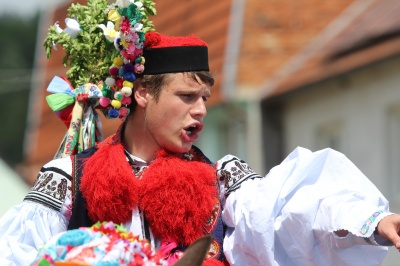 The festival has been organized by the local Sports and Culture Club jointly with Vlčnov’s Municipal Office. For information, tickets, and reservations, call the Information Office on +420 572 675 130 , email the Municipal Office at info@vlcnov.cz or www.jizdakralu.cz.