Vlčnov – a picturesque South Moravian village with more than three thousand inhabitants and situated near Uhersky Brod, is typical not only through its style, folklore, nice songs and good wine, but also through its history. Proof that life had already pulsated here in times long past lies in individual archaeological findings excavated in our cadastre.

Vlčnov had been mentioned in documents still preserved today as far back as in 1264; however, expert estimates place its origin at a much earlier period, proof of which has sadly not been preserved in writing. Since the 13th century, the village had been ruled over by Riesenburk nobility, who were the owners of a fortress built here. At that time, Vlčnov took on somewhat of a dominant role, as it was the centre of the so-called lucka province. Later on, Vlčnov became the so-called tenure of a margrave; Margrave Jost bestowed this tenure to the noblemen of Kravar. During the post-Hussite period, it was Burian of Vlčnov who strengthened his position and who not only gained the estates but also certain political respect. This was due to his buying Svetlov castle in 1449, which became his family place of residence outside Vlčnov. This significant family still used the title of Vlčnov in the middle of the 16th century, even though they had not owned Vlčnov for a very long time.

Jan of Kunovice took over Vlčnov from Burian in 1506 and the village’s fate is then on linked to Uherský Brod, the Kunovice feudal lords’ place of residence. Vlčnov then lost its unique priority and became an ordinary demesne village. One old monument reminds us of this period – a tombstone situated in the local church, carrying an inscription noting that it was here that Matous of Kunovice, who was the demesne owner’s brother, buried his two sons in 1560. The Kunovice feudal lords were the unopposed lords of Vlčnov for almost an entire century.

In 1611 the entire demesne, and Vlčnov along with it, was sold for 153 000 pieces of gold to Oldrich of Kounice. This family then owned our village and was closely tied to it right up to our century.

Vlčnov is a village of the old kind. Proof of this may be seen in the manner the houses are lain out and which thus determine the original shape of the village: so-called double terraced houses leading along the stream to the upper end (nos. 1 - 90) and down to no. 162, which is the mill. The remaining parts of the village originated later, mostly in the previous century. 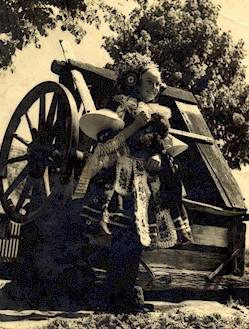 As with other villages in South Moravia, Vlčnov was also originally a purely agricultural village and each building or foundation was, together with its agricultural lands, an independent agricultural unit. One of the obligations which the Vlčnov serfs had towards their lords was to pay in kind, which was collected twice a year; and that on Saint George’s Day and Saint Wenceslas’ Day.

One document, written more than 150 years ago, tells us much more about the village in those days. It states that the village included 2781 acres of fields, 97 acres of meadows, 541 acres of grazing fields, 82 acres of vineyards, etc. The overall area of the entire village cadastre amounted to 3735 acres. (1 Austrian acre = 0.58 ha). Furthermore, the document tells us: “From the heights above flow springs creating a stream. It sometimes dries up completely. When there is a lot of water it propels the small mill here. Horses are bred in a number totalling 122, oxen in a number totalling 197, cows totalling 199, young livestock totalling 44, pigs totalling 150, purebred sheep totalling 1202 and 67 domestic sheep, all in Vlčnov. Breeding of poultry is insignificant. There are a number of chickens and geese in each house for the needs of the home. The horses are of a weaker breed and are used for less laborious fieldwork and pulling. Livestock is grazed and fed on the weeds of weeded cornfields and in winter they are fed a mixture of hay and straw. The larger farmsteads in the village keep two oxen or two horses, two cows, one young livestock animal and two pigs. Recorded are also 16 half-fields with a foundation area of 19 to 20 acres, 129 quarter-fields with 9 – 10 acres, 18 one-eighth-fields covering an area of 4 – 5 acres and 77 house owners with only a house. Apart from that, there are also seven other houses: the parish, school, distillation house, a farmyard, bum-bailiff’s home, a mill, and a taproom. The seigniorial distillation house has one boiler used to kindle a spontaneous fire and another used for distillation. Approximately 195 pails were distilled annually, where 1800 bushels of potatoes were used and 82 bushels of barley were used, all from the local farmyard. The product is sold locally as well as abroad to innkeepers”. This document reflects the economic relations within the village during the first half of the 19th century.

Viticulture was especially widespread during the 16th and 17th centuries and buyers from far and wide used to travel to Vlčnov for its wine. It was probably the middle of the 17th century that saw our viticulture flourishing the most; the recorded overall area of cultivated and abandoned vineyards counted 478 old half acres, which if converted is about 95 ha. A forest (game preserve) was planted in the abandoned vineyards, called the Mouse Mountains (today called Mysince) and this forest covered the whole summit of this hill. It was also here that at the beginning of our century the owner of the estate, Dr. Vaclav Kounic, had a castelette built, which became one of the dominant structures in the area. It dominated the surroundings for many decades until 1981, when it was demolished.

The life of the Vlčnov people was not at all easy. The 17th century especially was filled with many wars and destructive raids. Old chroniclers say that at that period in time, this flowering countryside was changed into a barren garden. It was primarily the longest and most terrible war of that period, the Thirty-Year-War, that left the saddest mark on Vlčnov. Whole villages were burnt to the ground and then inhabited only partly. It was only slowly that the nobility replanted the desolate foundations of their estates. The year 1663 was especially tragic for our ancestors. Vlčnov was plundered, burnt to the ground and 56 people were killed during the Tatar attack. The inhabitants of Vlčnov experienced an uncountable number of similar tragedies. The Prussian army attacked in 1866 and the last time an army passed through Vlčnov was in 1945.

In earlier times, local town councillors headed by the mayor managed the village. The village income was made up of fees paid for cottages, livestock grazing, rent of the local inn, brickyard, the sale of brushwood and spills taken from the local forest, rent of local blacksmiths’ shops, hunting fees, etc. The local council building used to stand in the middle of the village at no. 166. The local buildings included the so-called officer’s hang-out (no. 167), two local herder cottages (no. 14 and 163), a school (no. 184) and local blacksmiths’ shops at no. 241 and 232.

A school was built in the village in 1861 and a new school, called the town school, was built in 1921. The church is known to have stood since 1373; the main section was completed during 1929 – 1930. It carries the individual architectural elements of times past. Of the manorial estate, which is said to have existed as early as in the 15th century according to village records, only a few individual parts remain that were incorporated into later reconstructions. Social organisations are remembered to have been the Farmer’s Society, which was established in 1880, Raiffeisenka, a savings bank society (1900), the Premysl Readers’ Society (1892), Volunteer Fire Service (1894), Sokol (1909), Orel (1910), the Dairy Cooperative (1901), the Veteran’s Society (1880) and many other organisations that formed the social and cultural life of the village over many decades and many of which still exist today.

During 1914 – 1918, when the First World War raged, 409 Vlčnov residents left for the front. 58 of them did not return and laid down their lives on European battlefields. During the liberation struggles of the Second World War, 34 Romanian soldiers died in the Vlčnov area. The war took the lives of 14 village citizens; they were either unaccounted for, executed or tortured to death in concentration camps.

Since the war, Vlčnov went through many changes before it became what it is today; a village with three thousand inhabitants; on the one hand, a village boasting modern architecture, and developing trade and business activities, and folklore traditions, customs, beautiful folk costumes, good wine and in fact all that creates it and how it is known not only by its surrounding neighbours, but also by those more distance on the other hand. Let it therefore continue to prosper.